THE GUERRILLA ANGEL REPORT — Let there be no doubt here, any death while in police custody following being tased — which is what happened to El Paso, Texas, drag performer Fernando Gomez, known on stage as Mercedes Demarco, earlier this week — is outrageous. This incident needs to be fully investigated and if findings results in police usage of unnecessary force, severe disciplinary action taken.

The gist: Police responded to what is reported as a domestic disturbance call, found Gomez screaming and after being unable to subdue Gomez, used a taser. Later, while cuffed during transport, Gomez became unresponsive, and remained so after paramedics intervened. Gomez was later declared dead at a hospital.

The dilemma here is the question of whether Gomez’s death is a ‘TDOR’ relevant. The problem is twofold.

1) It is difficult to make a case that the police intended to kill Gomez specifically because of Gomez’s drag performer status. (Indeed, I’m unsure whether Gomez was in drag at the time or not.) If there’s no intent, there’s no hate crime.

2) While drag performers are under the transgender umbrella with respect to hate crime laws, they most likely have to be in drag for a clear hate crime case to be made — unless they can show prior knowledge. If the person being subject to violence is not in drag (and identifies with their birth sex), a hate crime case cannot be made.

[Since the story first broke, I’m seeing hints that Gomez identified as Mercedes Demarco off stage often and a female presentation was her preferred gender ID. If this is correct, I’ll make the changes in this report.]

My inclination here is to not include this death, as tragic as it is, in TDOR numbers as I’ve no interest in hyping up the numbers to score media points. Trans people die from non-hate related deaths every day — old age, sickness, automobile accidents and so on. We cannot track progress in reversing trans hate crime deaths if we don’t at least apply a scientific method of keeping tally.

Let there be no doubt however, the trans community in El Paso will mourn this loss, deeply.

Tip of the hat to Gabrielle Langmoore. 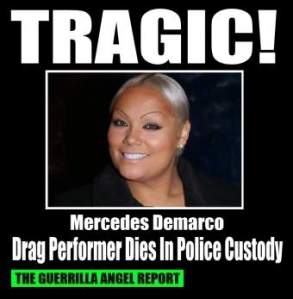 Is it time to see a great trans feature film? You bet! — Get the award-winning film Lexie Cannes and help cover GAR expenses: http://www.amazon.com/gp/product/0963781332   Or via PayPal: http://www.lexiecannes.com/id13.htmlTHE GUERRILLA ANGEL REPORT is associated with Wipe Out Transphobia: http://www.wipeouttransphobia.com/Read Lexie Cannes in The Huffington Post: http://www.huffingtonpost.com/courtney-odonnell/