Number of undocumented trans immigrants in the U.S. may approach 50,000

THE GUERRILLA ANGEL REPORT — The National Center for Transgender Equality’s (NCTE) new study is reporting higher rates of physical or sexual abuse to undocumented trans workers than to the trans population in general, and they’re also getting short shifted in the workplace — they experience a high rate of employer violation of the time and wage rules or lose their jobs outright.

An exact number of undocumented trans immigrants is elusive due individuals hiding their identities. However, this doesn’t impact the study’s alarming findings over a wide range of conditions, including housing, the workplace and within the immigration system.

The NCTE is urging Congress for immigration reform as a solution to these conditions but admits it’s a ways in the future.

Keep in mind, the abuse and discrimination rate for trans people in general is already woefully high — this study reveals undocumented immigrants face even harsher conditions.

After looking at some of the findings, I noticed the study found that the homeless rate of undocumented transgender immigrants are double that of trans people in general. Along with employment discrimination, this gives further credence for the reason many trans people turn to sex work to survive — they’ve no choice.

NCTE’s new study: “Our Moment for Reform: Immigration and Transgender People” http://transequality.org/Resources/CIR_en.pdf
An earlier study by NCTE on conditions for trans Americans: https://lexiecannes.wordpress.com/stats-on-transgender-discrimination-violence-and-suicide/
As usual, Zach Ford has a good summary: http://thinkprogress.org/lgbt/2013/10/04/2733151/study-undocumented-transgender-immigrants-face-high-levels-of-discrimination/. 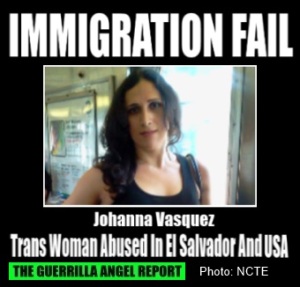 Do you think it’s about time to see a great transgender feature film? Get the award-winning film Lexie Cannes and help cover our expenses: http://www.amazon.com/gp/product/0963781332   Or via PayPal: http://www.lexiecannes.com/id13.html