THE GUERRILLA ANGEL REPORT — While it’s one thing to have a neighborhood watch group to assist local police agencies in keeping neighborhoods safe but it’s another thing to use transphobic fear mongering tactics to rally up group support and a fund-raising tool.

“Trans prostitute gang”, “trannies” and “smelly goats” were terms the Midtown Ponce Security Alliance (MPSA) used in a recent newsletter. Even though the Atlanta police have debunked their claims and opposed their tactics, the group claims they are the reason for the decline of trans sex workers in the area.

A local paper, the Midtown Patch reprinted MPSA’s newsletter article giving the neighborhood watch group’s transphobic fear mongering a wider audience. A local LGBT organization — Project Q Atlanta took the Patch to task for doing that  in an article condemning both the MPSA and the Patch.

My hats off to Project Q Atlanta for bringing this to our attention.

The MPSA has a board of directors — hopefully we can persuade enough of them to back off: 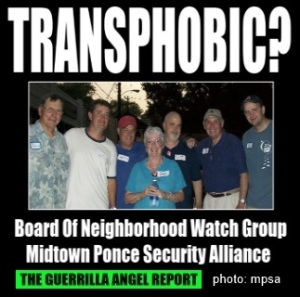 Want to see a great transgender feature film? Get the award-winning film Lexie Cannes and help cover our expenses: http://www.amazon.com/gp/product/0963781332   Or via PayPal: http://www.lexiecannes.com/id13.html