THE GUERRILLA ANGEL REPORT — A suspect has been arrested following the beating death of a trans woman earlier this week in Baldwin Park, just east of Los Angeles. Friends and social media contacts have confirmed the identity of the woman as Melony Smith.

The suspect, Stephen Gonzales, is being held by the Los Angeles County Sheriff Department on drug charges and is expected to be charged with the murder shortly.

An autopsy revealed Smith was beaten to death. The police asked that anyone with information call the Sheriff’s Homicide Bureau at 323-890-5500.

Tip of the hat to Gina Bigham

A Trans woman in Baton Rouge, Louisiana was found beaten to death in an abandoned house. News reports say Shaun Hartley was a witness to a murder by former roommate and she previously told authorities she feared for her life.

Newspaper reports indicated she regularly presented as female. I’ve been unable to confirm if she used a different name. The same reports suggested that she was mentally challenged.

There are no further details. 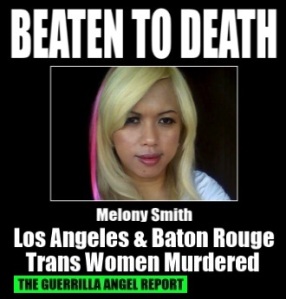 DO YOU WANT TO HELP LEXIE WITH TRANS ADVOCACY? Get the award-winning trans-themed feature film Lexie Cannes and help cover our expenses: http://www.amazon.com/gp/product/0963781332   Or via PayPal: http://www.lexiecannes.com/id13.html

Like Loading...
‹ (UPDATE: Plans to run for Russian President) Trans lawyer in Russia thumbs nose at Vladimir Putin
Trans worker gets $50,000; firing people on the basis of gender ID or expression may be history ›