THE GUERRILLA ANGEL REPORT — While it’s one thing for a nationally known apparel maker to put out a call for transgender models, it’s another thing to do so immediately following somewhat of a controversial national discussion about trans people triggered by the Chelsea Manning case.

Although this promotion likely may have been on the schedule for some time, however there was ample time for American Apparel to postpone, and they didn’t. So for that, I’m giving them kudos for this gutsy move!

For those who argue this kind of campaign amounts to exploitation, I vote no. Not only is it an opportunity of trans people to model — we certainly know there’s no shortage trans models — there’s the opportunity to portray trans people in a positive light, something that’s often in woefully short supply at times. American Apparel has a track record of doing good for trans and LGBT people, so I suggest we give them a bit of leeway if they happen to make a few bucks along the way.

I am not entirely sure if the promotion was a one day thing or ongoing. Traffic was heavy when I attempted to get further information.

I previously wrote about American Apparel when they hired America’s Top Model contestant and trans women Isis King to model for them: https://lexiecannes.wordpress.com/2012/06/10/trans-woman-seeks-to-re-enlist-in-the-national-guard-isis-king-to-model-for-american-apparel/ 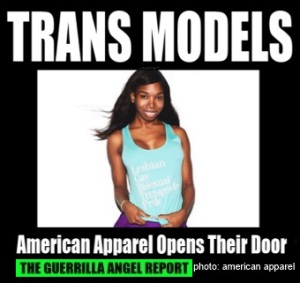 DO YOU WANT TO HELP LEXIE WITH TRANS ADVOCACY? Get the award-winning trans-themed feature film Lexie Cannes: http://www.amazon.com/gp/product/0963781332   Or via PayPal: http://www.lexiecannes.com/id13.html