Home › Everything else › (UPDATE-3) Suspect arrested, arraigned for the 2013 killing of CA trans woman Domonique Newburn

A 19-year-old San Bernardino man accused of the 2013 slaying of a Fontana transgender woman has been scheduled for arraignment Aug. 18 on a charge of murder.

Dantijer Domenick Powell, 19, has been held without bail in the Adelanto Detention Center since his arrest on a murder charge and extradition from Springfield, Mo., in February, according to jail records.

(Original article) Following a domestic disturbance report, police found trans woman Domonique Newburn dead in her home in Fontana, California on August 20th. The scene was described as ‘grisly’ and it appeared Newburn tried to get away but did not succeed.

Witnesses say a suspect left the scene with the victim’s car. He was described as an African-American male around age 30.

Fontana detectives are expected to search for evidence Thursday inside the car of a transgender woman who was killed inside her Fontana apartment earlier this week.

The black Mercedes belonging to Domonique Newburn, 31, was found Wednesday afternoon about 13 miles and two cities away at Perris Hill Park in San Bernardino. Police said initially that the man suspected of killing Newburn escaped in her car afterward. Police officials said Thursday it appeared Newburn’s car had been at the park “for some time.”

Witnesses told police that Newburn’s suspected killer made off with clothes and her computer.

Authorities described him as in his late 20s or early 30s, 5-feet-8 with an average build and wearing blue jeans.

Police have identified a suspect in the slaying of a transgender woman who was found dead in her Fontana apartment.

Fontana police Sgt. Doug Imhof said detectives believe 18-year-old Dantjier Powell of San Bernardino may be trying to flee the state. They were seeking the public’s help in finding him.

Imhof said investigators have not established a motive in the killing of 31-year-old Domonique Newburn, a YouTube reality star who was found dead Tuesday after neighbors reported a disturbance.

Witnesses reported seeing a man leaving Newburn’s apartment in her black Mercedes. The car was later found in San Bernardino.

Newburn appeared under the stage name “Domonique Duffy” in the premiere episode of “Hollywood Houseboys,” a reality show about a group of black gay men trying to make it in Hollywood. 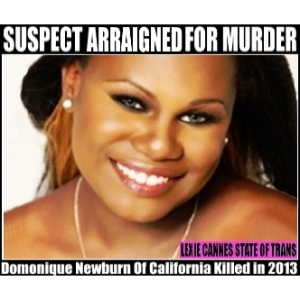