Rabid anti-trans/LGBT moralist busted for rape of minors, including males 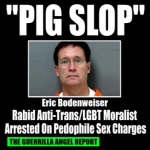 THE GUERRILLA ANGEL REPORT — 113 felony sex charges — that is what Eric Bodenweiser, and according to some news sources, a ‘rabid anti-trans LGBT activist’, now faces instead of an easy slide into the Delaware Senate — he was supposedly a rising star in the Delaware GOP.

Bodenweiser belonged to a notorious hate group — the Delaware Family Policy Council. Although their website is now down and I wasn’t able to pin down his exact position within the group, however, a little trip around the net revealed that this group’s official responses to public commentary included referring to trans/LGBT people as “pig slop”. That is pretty much all we need to know here. Lets hope this group implodes.

As for Bodenweiser, he’s just another in a seemingly endless series of moralists caught up in doing the very thing they publicly oppose. With minors involved, he’s also a pedophile. Now we know who the real “pig slop” is. 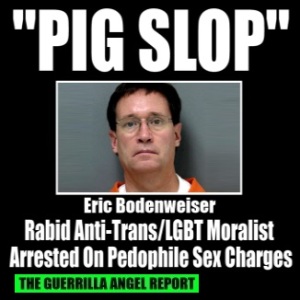