THE GUERRILLA ANGEL REPORT — Word is that a same-sex marriage equality bill expected to be introduced in the Australian state of New South Wales will specifically exclude trans people.

From the Sydney Morning Herald: “The bill makes it clear it is about the marriage of same-sex couples only. Trans-sex marriages are not allowed . . .”

Cat Rose of Community Action Against Homophobia in response: “. . . Our campaign has been for full equality for everyone, we don’t settle for concessions and we won’t stand for this transphobia and the invisibilising of intersex people.”

This development unfolded in only a matter of days. The Australian trans community ought to respond to their Members of Parliament ASAP!

This development underscores an apparent trend of conservatives of shifting their targets away from gay people in general and zeroing in on trans people. 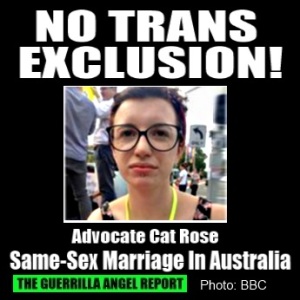