THE GUERRILLA ANGEL REPORT — U.S. Senator Jeff Merkley of Oregon applauded the senate committee’s bi-partisan passage of his trans and LGBT employment non-discrimination bill — more commonly known as the Employment Non-Discrimination Act (ENDA). While Merkley’s bill has ways to go before coming law, it would afford national protection for all transgender people working in the United States.

Sen. Merkley: “All Americans deserve the right to work hard and earn a living. It is fundamentally inconsistent with our American values that in 29 states you can still be fired for who you are and whom you love.. . . I look forward to working with Leader Reid and the rest of my colleagues to get this bill on the floor and passed through the Senate.”

I voted for Sen. Merkley in 2008 in an election that successfully booted an anti-trans GOP Senator out of office affording the state of Oregon two advocates for trans people in the U.S. Senate. In the Senate, Merkley has recently been instrumental in ridding it of gridlock and improving Senate functionality. I expect Merkley to continue speaking for us all the while elevating the discourse in Washington DC. 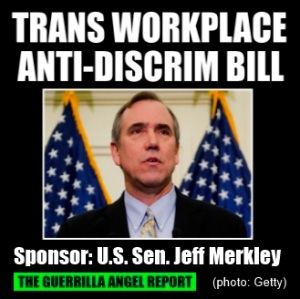