THE GUERRILLA ANGEL REPORT — Long time SF transgender and community advocate Jazzie Collins passed away recently from an apparent ongoing illness in a hospital surrounded by friends. She was reported to be 54.

Collins was especially noted for tirelessly fighting for vulnerable communities.

Quite a few esteemed members of the trans community have left tributes and comments on Jazzie’s Facebook page: https://www.facebook.com/jazzie.collins?directed_target_id=0

(In the photo, Ammiano is on Jazzie’s right. Can someone confirm who is on her left?)

Tip of the hat to Pamela Curry. 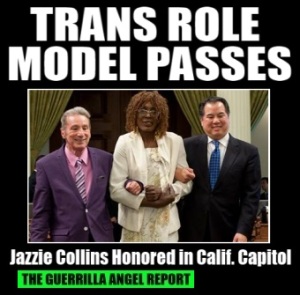