Trans woman stabbed to death at home in Turkey

THE GUERRILLA ANGEL REPORT — A trans woman was found stabbed to death in her house in the providence of Kusadasi in Turkey. The body of Dora Oezer was discovered by her roommate. ‘The police have begun an investigation into the murder and an autopsy is scheduled.

Transgender Europe’s Richard Köhler: ‘Unfortunately, Dora is not a rare case, there is a systematic murdering of trans people in Turkey, some even call it a trans massacre.’

Kaos GL and Pink Life LGBTT released a statement condemning the Turkish government who they believe is reluctant to take on transphobic violence. They also said protests condemning transphobia and hate crimes will be held in İstanbul, İzmir and Eskişehir on Friday at 6 pm.

I’ve written about a number of trans people killed in Turkey:  https://lexiecannes.wordpress.com/?s=turkey

More about  the stabbing and the protest here: 24-Year-Old Trans Woman Stabbed to Death in Turkey | Kaos GL – News Portal for Gay Lesbian Bisexual and Transgender People.Additional information on the killing.

Tip of the hat to: Jasmine Emily Seymour 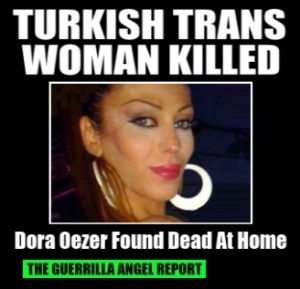