THE GUERRILLA ANGEL REPORT — Flying almost under the radar last week in the midst of headlines of attacks on numerous trans women in the city, the Washington DC Council unanimously approved a simplified process of changing gender markers on birth certificates.

The amendment, the JaParker Deoni Jones Birth Certificate Equality Amendment Act of 2013, was named after Deoni Jones, a DC trans woman who was murdered in 2012. Both the DC Trans Coalition and the National Gay and Lesbian Task Force’s Transgender Civil Rights Project had a hand in getting this enacted.

There is one more vote before final approval then the mayor needs to sign off on it, but signs indicate it is on way to becoming law and likely will take effect this fall. 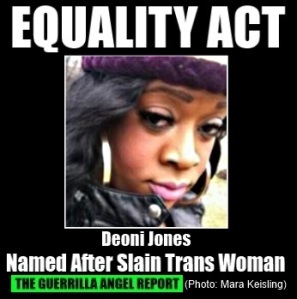 SUPPORT TRANS ADVOCACY by donating $9 and get a DVD of the award-winning trans-themed feature film Lexie Cannes: http://www.amazon.com/gp/product/0963781332   Or via PayPal: http://www.lexiecannes.com/id13.html