Chrisie Edkins, trans musician, activist and more than a stat

THE GUERRILLA ANGEL REPORT — Chrisie Edkins died nearly 3 weeks ago. Her funeral was held yesterday in Southamption, in the United Kingdom. By all measures, she was highly regarded and admired in the trans community — not only was she a trans activist, she was a singer and musician of note. Her death was a shock to many that knew her, and she was mourned by people around the world. Yet for three weeks, I struggled with the decision whether or not to write this story.

Her death was deemed ‘not suspicious’. She was only 33, and in the absence of violent circumstances or medical illness, that pretty much leaves only one reason — suicide.

I rarely report on suicides. Instead I point to the statistics —  for instance, 41% of trans people attempt suicide. This is more than 20 times as often as society as a whole. I report this figure frequently and I have an easily accessed page on this blog that contains the results of the research and agency that compiled these figures. Its irrefutable facts, not emotional pleas that get laws enacted and policies changed to reverse these dismal conditions.

At the same time, trans people and their allies need to be reminded from time to time that even the most seemingly strong and well-adjusted amongst us can lose their grip on reality. I think this is such a time. Chrisie Edkins helps serves as a reminder not to take such people for granted — they may indeed dwelling on the edge themselves.

Although, she, too, is now a stat, I’ve no doubt she had a hand in keeping many others from being one. Its for this contribution she’ll be remembered.

Chrisie’s funeral will be colourful celebration (From Daily Echo). 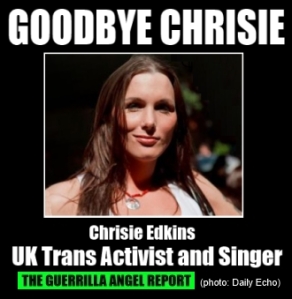