THE GUERRILLA ANGEL REPORT — Admittedly, I don’t know where transgender issues rank on Sen. Davis’ list of priorities, but I do know history making when I see it. Wendy Davis’ stand in the Texas statehouse is going down in the history books.

I was one of the 150,000+ people watching the drama in the Texas senate unfold live via streaming — it was a feast for political junkies. The disclosure of backtracked time stamps was just pure gravy. And for the icing on the cake, it was the moment the when the lieutenant governor returned to the podium and admitted to being owned by the Democrats.

But enough of food metaphors. The floor belongs to Sen. Davis. Even though in the larger picture, a true win was mathematically impossible — the GOP has majority rule in both statehouses and holds the executive office in Texas, In addition, the governor can keep calling the special sessions until the anti-choice legislation finally passes. Compounding the picture is the recent US Supreme Court decision that could lead to Sen. Davis’ district being redrawn — endangering her own hold on her seat in the Texas Senate in 2014.

Still, enough was enough Sen. Davis figured, and decided she was going to take a stand and begin a filibuster on the Senate floor, if only to make a point. Little did she know that she was going to pull off one of the biggest symbolic political victories in recent times. This one was HUGE. When the Republicans in Texas finally get their bill passed, it’ll be overshadowed by the victory of Wendy Davis.

While the Republicans may win this battle, but because of people like Wendy Davis, they’re on track to lose the war.

Tip of the hat to Cristian Williams and Meghan Stabler for their social media updates during closing moments of the drama! 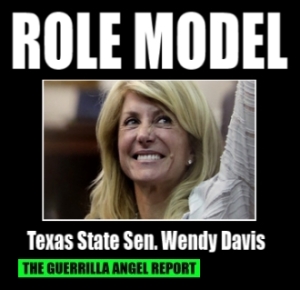