THE GUERRILLA ANGEL REPORT — The judge didn’t buy the defense’s “non-violent compassionate man” defense and tossed Sama Chaka Quinland in jail for 30 years for the killing of trans woman DeAndre Fulton-Smith* in 2011.

According to news reports, Quinland will have to serve 80% before becoming eligible for parole. Quinland met Smith through a website. A tip from a viewer who saw an episode of “America’s Most Wanted” about the killing helped lead to the capture of Quinland.

Smith was a Spartanburg Community College student at the time of the murder. Her body was found with 22 stab wounds and she was shot in the head twice.

A judge throwing the book at the murderer of a trans woman in the south? I’d say we’re seeing progress. 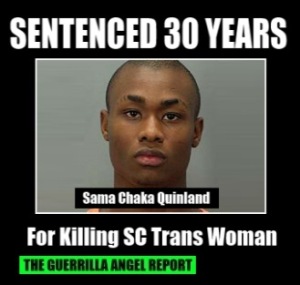 Support THE GUERRILLA ANGEL REPORT by buying a DVD of our award-winning trans-themed feature film Lexie Cannes: http://www.amazon.com/gp/product/0963781332 Or via PayPal: http://www.lexiecannes.com/id13.html