John Boehner, Speaker of the U.S. House of Representatives

THE GUERRILLA ANGEL REPORT –[UPDATED Feb. 28, 2013. House Republicans do an aboutface, vote FOR trans inclusion, bill on way to Obama’s desk. See Below.]

Stripped from the House VAWA bill by Republicans was language to specifically include trans women and lesbians. The Senate has already passed a VAWA bill that includes both groups of people — a bill that got support from both sides of the aisle. Democrat leaders have denounced the actions of the House Republicans for making this anti-violence act a partisan issue.

The VAWA first became law in 1994, however, it needs to be reauthorized and House Republicans are derailing the reauthorization of bill after it was modified to include gender identity and sexual orientation. If the House version passes, it appears likely the transgender inclusion in the Senate bill will become a topic of prominence in Congress.

UPDATED. This is from J Skyler Robinson of Examiner.com:

After a lengthy, two year battle, the Violence Against Women Act has been reauthorized by Congress after today’s vote in the House of Representatives. First enacted in 1994, the law was drafted to provide greater legal protections, services and other benefits (such as emergency housing) to survivors of domestic violence. Last April, the bill was modified by the Senate in order to address issues such as sexual orientation, gender identity, Native American reservations and undocumented immigration status. Although lesbian, bisexual, transgender, transsexual, Native American and undocumented women would have been explicitly protected under the law, the bill was rejected by Republicans in the House of Representatives for being “politically driven,” allowing the law to expire for the first time.

Since then, Republicans and Democrats in the Senate and in the House have battled over the additional protections given to minority groups. House Republicans drafted their own version of the Violence Against Women Act, stripping it of all provisions to include sexual orientation, gender identity, Native American reservations and undocumented immigration status. However, in a 286 to 138 vote, the House has passed the Senate’s all-inclusive version of the bill, after rejecting its own stripped down version by 257 to 166. President Obama is expected to sign the bill into law by the end of the week. 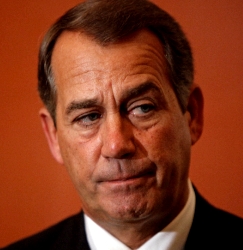 John Boehner, Speaker of the U.S. House of Representatives