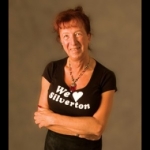 THE GUERRILLA ANGEL REPORT — [I wrote this for Just Out.] On Election Day 2012, a transgender Oregonian drew national attention for the second time by winning a fifth term as Mayor of Silverton, Oregon. Stu Rasmussen first drew media attention in 2008 by being the first transgender person elected mayor in the United States.

[Read the entire article on the Just Out site here: http://www.justout.com/columns/voices/in-transit/trans-mayor/ ]

Stu was born and grew up in Silverton. She was hired by Tektronics right out of college, eventually ending up as a staff engineer for the Television Products Division. Later, she started a cable television company with a partner bringing service into Silverton and Mt. Angel. After a while she sold that company and moved on to a number of other engineering ventures as well as running the Palace Theatre in Silverton. She also dabbled in local politics and along the way changed her gender and decided to shoot for the mayor’s chair after serving three 4-year terms on the city council. Although national media came to town following her victory, Stu says it was “no big deal” in Silverton.

A visit to Stu Rasmussen’s campaign website reveals that this no ordinary trans woman. The site states: “If you just stumbled on this site you may be asking yourself ‘Is this guy for real?’ or ‘Is that really a guy?’” No beating around the bush here.

Stu kept her first name after she changed gender. Pronoun references to Stu in the local media appear to use both forms. This had me wondering a bit so I checked in with Stu and asked her about this and a couple of other things.

Just Out: Any pronoun preference?

Stu Rasmussen: I avoid ‘pronoun angst’ by personally not caring whether I’m referred to in male or female terms. I grew up here [Silverton] as a guy and have transitioned to something ‘in-between’ where either is correct – so either pronoun works fine.

JO: Has being trans presented opportunities for you (and for the city of Silverton) you might not have had otherwise?

Stu: The publicity after the 2008 election has resulted in a small bump in tourism — we should probably have capitalized on it early on but the Chamber of Commerce was in the other political camp. That may change.

JO: How do you view Portland as Mayor of Silverton?

Stu: I like Portland (it’s really ‘a small town with a lot of people’) and visit at least once a week just so I can appreciate what we have here when I return. I describe Silverton as ‘40 miles and 40 years’ from Portland. Our downtown is a time capsule of when I grew up in the 50s and 60s and is a great spot for day trips from the Portland area. A weekend spent at the Oregon Garden Resort here and wandering in Silverton’s business district is a great opportunity to re-charge one’s personal batteries.

JO: Any advice for Portland’s next mayor?

Stu: Avoid trysting with a teenager.

JO: People who know you comment about what a great guy you are. These comments are made by people who live, lived or just drove through Silverton. Most politicians would love this kind of feedback. What’s your secret?