LAPD says ‘Western Bandit’ transgender killer may be back

THE GUERRILLA ANGEL REPORT — The Los Angeles Police Department says they believe the “Western Bandit,” a violent serial robber who also killed a trans woman named Cassidy in November 2011, has resurfaced, pulling an armed robbery on Jan. 8th and an attempted robbery that same day.

I wrote the following two months ago: “The LAPD has tied the death of trans woman Cassidy who was killed [Nov. 2011] on West Lexington Avenue in Hollywood during an armed robbery to a violent suspect who has terrorized the area with a string of robberies. The suspect is dubbed as the “Western Bandit” after the area he has conducted most of the robberies in.” More about that murder: https://lexiecannes.wordpress.com/2012/11/18/lapd-says-western-bandit-killed-trans-woman-one-year-ago/

Los Angeles police Lt. John Radtke says the Western Bandit is ‘very violent and quick to use a firearm.’ He’s black, stocky and between 5 feet 9 inches and 6 feet tall, and rides a bike.

While no one knows for sure if he’s specifically targeting trans people, those in the area ought to take additional precautions.

Photo of the “Western Bandit” and Cassidy, the trans woman he killed 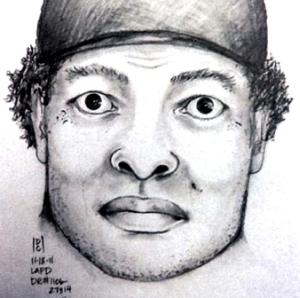 Like Loading...
‹ Prominent psychiatry expert: ‘no such thing as transgender’
UK’s “Observer” owns up to transphobic article publication blunder ›