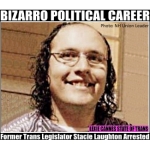 “Stacie Laughton, the state’s first openly transgender legislator, was arrested Thursday by Nashua police after saying she is the person responsible for calling in a hoax bomb threat at a local hospital. Laughton, who was elected to the House of Representatives and then withdrew her candidacy days later, turned herself in on Thursay on a warrant for the Feb. 27 incident after spending two weeks receiving treatment at a Vermont hospital for bipolar disorder. Police charged her with a felony count of falsely reporting an explosive.
“I have had a mental illness my whole life, and I guess this was my worst break with it. I was untreated for a long time, and I didn’t have medication,” Laughton told the New Hampshire Union Leader, adding she is very remorseful for her actions.”
——-

Laughton is reportedly going to withdraw her candidacy to fill the vacant state legislature seat left open by her earlier resignation after winning that seat last November.

The saga of Laughton’s short, but eventful political career includes announcing that she was quitting after her prior felonies were disclosed after she was elected, however, she later changed her mind, and decided to keep her seat only to once again changed her mind and signed resignation papers on local TV. She later announced she was going to run for the now-vacant seat she once held. She also opened some eyes after being seen ringing a bell for the Salvation Army during the Christmas holidays. 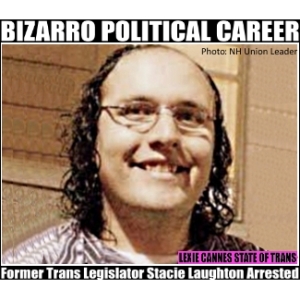 Like Loading...
‹ Angry legislator proposes bill to pay for all sex reassignment surgeries to ‘make a point’
While trans model Andrej Pejic rocks high fashion world, a bigger story lies under the surface ›