Laughton: “I believe that at this point, the LGBT community will hopefully be inspired. My hope is that now maybe we’ll see more people in the community running, maybe for alderman. Maybe in the next election, we’ll have a senator. . . . We are people, too, who still have talents and ideas. And I hope that people won’t be afraid to get into politics, or any other position, for that matter. I want the community to feel inspired.”

University of New Hampshire’s political science professor Marla Brettschneider: “It’s a really historic moment for Nashua and New Hampshire and the nation to start to really reimagine what citizenship and leadership can look like.”

UPDATE — Nov. 24, 2012 [It is not my intention to judge anyone here, however, this story is being covered in the local media and I would be doing my readers a disservice if I didn’t keep everyone informed.)

From the Nashua Telegraph:

“Newly elected state representative Stacie Laughton, a Gate City Democrat, has been getting national attention since her win earlier this month, which made her the first openly transgender elected official in the state.

But this weekend, that attention turned negative after a story in the Laconia Daily Sun revealed that Laughton served four months in jail in 2008 on felony charges of conspiracy to commit credit card fraud.”

Laughton’s Facebook response: “I am sorry for the people that can’t let my past go. I have made mistakes just like everyone else. No one is perfect. I don’t want to talk about my past nor do I care about my past. I live for today and my future. If you want to talk about me please by all means do so. At least your leaving someone else alone. That is all I have to say about it.”

From The Huffington Post: “New Hampshire’s history-making transgender state representative has announced she will resign after news of her criminal record surfaced. As Nashua Patch is reporting, State Representative-Elect Stacie Laughton decided to step down after it was revealed that she had served four months in Belknap County House of Corrections following a 2008 credit card fraud conviction. Laughton said she will formally resign her seat via a letter to be sent to the Secretary of State’s office . . .” 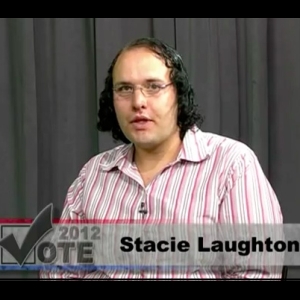