[UPDATE: GUILTY VERDICT!] DC cop who opened fire on transwomen while standing on hood of car, to begin shortly

THE GUERRILLA ANGEL REPORT — [UPDATE: DC cop gets guilty verdict! See below.] In August 2011, Washington DC Metro Police officers found off-duty MPD Officer Kenneth Furr standing on the hood of a car, firing his service revolver at two trans women and their friend through the windshield. The occupants of the car suffered only minor injuries.

Furr, who is no longer a DC cop, has pleaded not guilty to the charges of assault with a dangerous weapon and DUI. Jury selection for the trial begins next week.

DC Mayor Vincent Gray stated this in August: “These are serious charges, and they are particularly disturbing to have been brought against one who is sworn to protect and serve.”

From my last update on this story last March:

Apparently Furr, who was drunk at the time, attempted to solicit sex from a trans woman in a store which eventually resulted in a confrontation when she refused his advances and her friend entered the conversation. After the group was forced outside by a security guard, Furr brandished a gun upon entering his car then drove off. The other party met up with some friends and left in another car. A while later, these cars collided, which was followed by Furr jumping on the hood of the other car and firing five shots, supposedly yelling: “I’m a kill all of you.”

A D.C.police officer who jumped onto the hood of a packed car and fired five gunshots at its occupants minutes after offering a transgender woman $500 for sex was found guilty of assault with a deadly weapon Friday.

Kenneth D. Furr, 48, also was convicted of solicitation. He was acquitted of the most serious charge he faced, assault with intent to kill, and six related offenses stemming from an Aug. 26, 2011, argument that turned violent. 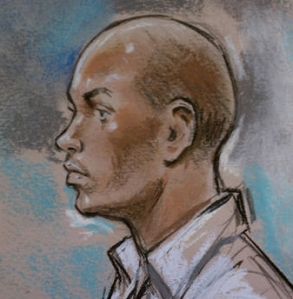