THE GUERRILLA ANGEL REPORT — Hands down, suicide is among the most difficult thing for me to write about, but it is such a huge elephant silently stumbling around in the trans world, it does no good to any of us to ignore its presence.

Last July we were reminded again suicide can happen to the best of us when prominent Canadian trans activist Kyle Scanlon took his life. https://lexiecannes.wordpress.com/2012/07/12/toronto-canada-trans-community-leader-kyle-scanlon-dies/

Indeed, a recent and widely shared study indicated that upwards of 40% of trans people attempt suicide in their lifetimes (the cis population rate is under 2%). http://endtransdiscrimination.org/PDFs/NTDS_Exec_Summary.pdf

Just weeks ago there were a few discussions at social media websites where we saw “experts” claiming the trans suicide rate isn’t as bad as the study and us writers are making it out to be. If this is true, they need to make their case, backed up with evidence — not just merely denying a suicide problem exists.

It is said Staffordshire University (UK) student Natasha Lauren Brown began a downward spiral after she was taunted and beaten. Her life ended May 14, 2012 from liver failure after she ODed on paracetamol.

Although gifted, Brown struggled with depression and other issues throughout most of her teens. It was only in the last few years that she decided to officially move forward and change her gender identity. Even though Brown had contact with mental health professionals, her family believes their daughter would still be alive if the UK’s mental health services we better equipped to handle gender identity issues — something the family felt these professionals came up short on.

Brown’s mother:  “We’d just like to say we strongly believe the mental health services could have done more to help her than they did.”

Staffordshire University student union president Fiona Wood [commenting on the beating and bullying]:  “Some people just don’t understand the issue and how society can turn against the individual.”

Sadly, this type of ending is not uncommon and happens everyday — even in seemingly progressive countries like the United Kingdom and the United States. A reality check like this from time to time will ensure that the suicide problem continues to be worked on and not swept away out of sight.

Gifted Hanley student was killed by pills overdose | This is Staffordshire. 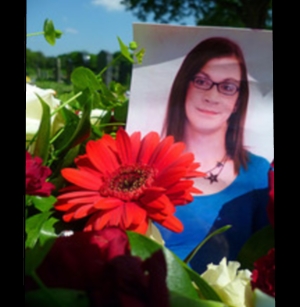