Chicago police say these killings likely not related. How could trans killings NOT be related?

THE GUERRILLA ANGEL REPORT — How can they not be related? While one was stabbed and another shot, months apart, perhaps by different people, the fact of the matter is this: the killing of trans people are becoming so common place, they’re starting to occur within blocks of each other. What do nearly all transgender killings have in common? Trans victims are targets specifically because they are transgender!

The latest trans victim is Donta Gooden, aka Tiffany, killed in the K-Town area of Chicago. The medical examiner ruled the stabbing a homicide. Her body was found in an abandoned building.

Gooden’s body was found three blocks from where trans woman Paige Clay was shot to death in an alley last April. I wrote about Page’s death earlier this year: https://lexiecannes.wordpress.com/2012/04/16/trans-woman-shot-in-chicago-expelled-trans-student-under-investigation-for-pitt-bomb-threats/

I just did a search for an update on the earlier Paige killing hoping that perhaps her killer was found. The only thing that came up was the mention of Paige during a recent pride event. Nothing else. This likely means one of two things — the police haven’t found Paige’s killer or the news media didn’t bother to cover the story following the initial killing. Perhaps now with the second killing, related or not, we’ll see stepped up efforts. Maybe. 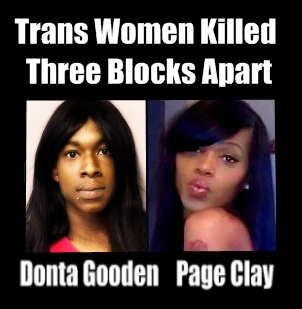 Chicago police say these killings likely not related. How could trans killings NOT be related?

Like Loading...
‹ The latest on restructuring at Gallaudet University: new memo from the Provost
Hank Williams Jr: “We’ve got a Muslim president . . .” ›