Home › Everything else › Deaf community extremists become unglued over “isms” 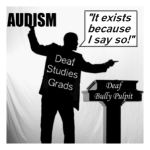 You’ve a brain. Decide for yourself.

LEXIE CANNES STATE OF TRANS — Not on board the deaf community’s “ism” bandwagon? Don’t worry, most of us aren’t either, and you’re not missing anything too important. For all the ranting and rambling over “isms”, deaf people DO have legal recourse against discrimination. The ADA (Americans with Disabilities Act) is an attorney’s weapon of choice and the Social Security Administration’s definition of deafness being among the most debilitating of disabilities is a pretty hefty safety net for D/deaf Americans when it comes to equality, jobs, benefits and one’s general well-being.

A small fraction in the Deaf academic community believes there is an organized conspiracy among hearing people to oppress the deaf — hence the invention of the word “audist” a while back. Then, as now, not all in deaf academia believe that to be true — esteemed Gallaudet educator of the deaf Donald F. Moores summed it up best not too long after the word was first coined: “I don’t believe there is an audist establishment, but there are audist individuals.”

Dr. Moores is spot-on as there are individuals, for whatever reason, are bent on oppressing some deaf people — no amount of public awareness can stop some of them, however, after the fact, they can be dealt with using the court system armed with the weapons mentioned earlier.

But an organized conspiracy among hearing people to oppress the deaf? I don’t think so. Unfortunately, the extreme fraction precludes this topic from ever reaching the table for discussion. Individuals questioning Deaf “isms” tenets, whether in public, or on social media and blogs are subject to ridicule and ad hominem attacks. Some prevent the topic from being considered a matter of discussion through the use of rhetoric and academic terminology nonsense to distract and confuse people.

Hell, yes, it’s easy to get on board a bandwagon fighting against supposed oppressors of the deaf, but once aboard, you become part of a choir, blind to the world except for the view expressed by a bandleader. And sometimes, the bandleader is as blind as you are. 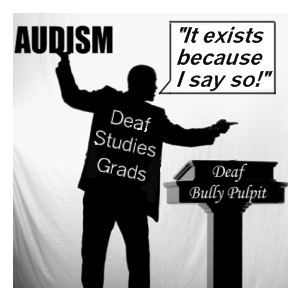 We’re all blessed with the ability to do critical thinking. Make up your own mind about these things.