THE GUERRILLA ANGEL REPORT – (UPDATE: July 1, 2013 — the stickers are finally gone. See below.) The pun is unintentional, but ironic. A trans person risks being laughed at by a SEPTA bus driver in front of passengers for having the “wrong” gender sticker on their monthly bus pass.

A group of transgender advocates in Philadelphia called RAGE (Riders Against Gender Exclusion) have been fighting the area’s transit system, SEPTA (Southeast Pennsylvania Transit Authority), over the gender stickers on the system’s monthly “TransPass” — a situation that clearly can cause embarrassment and confusion for trans people. Reports state some trans people were even prevented from boarding and ridiculed by drivers. SEPTA says the gender stickers are necessary to combat fraud — especially spouses sharing passes.

RAGE has collected signatures and staged protests since its founding in 2009 in an attempt to get the gender stickers off the TransPass. Recently however, founding member Max Ray stated that SEPTA general manager Joseph Casey will petition SEPTA’s authority board to remove the sticker requirement in 2013. This was reported in several news sources.

However, NBC 10 reported this: “A SEPTA spokesman told NBC10 the decision [to remove stickers] was unrelated to RAGE’s protest however. Instead he said it was made simply because there wasn’t a need for any stickers on the new preloaded card.”

UPDATE — July 1, 2013. Although this issue was supposedly settled a year ago, SEPTA apparently didn’t do away with the stickers until this month.

For the first time in decades, SEPTA TransPasses and TrailPasses will lack a controversial element: those “M” and “F” stickers identifying the gender of the person who bought them.

[the elimination of gender stickers) may seem like a small tidbit in the grand scheme of an incredibly expensive, multi-year fare technology improvement that is touted to eventually include a “contactless” payment method.

But the elimination of those little, yellow stickers was a hard-fought battle for a local group called Philly Rage, a group that formed in 2009 and has the slogan: “Keep Transit Officials Out of Your Pants.”

The group objected to the gender stickers disenfranchised some people in the LGBT community.

“One of the first people to take a public stand on the issue was Charlene Arcila, a local trans woman and community advocate. In 2007, after trying to board a bus and being told she couldn’t use the transpass she had purchased because of her gender, Charlene worked with Equality Advocates to file a formal complaint with the Philadelphia Commission on Human Relations,” RAGE says on its website of the beginning of the three-year campaign.

By early 2012, SEPTA decided to eliminate the stickers.

The stickers began as a policy in the 1980s to stop couples from sharing their passes, SEPTA officials have said.

“We thank SEPTA for doing the right thing,” RAGE co-founder Max Ray said in April last year. “New fare system delays may be unavoidable, but SEPTA realized that human rights can’t wait. I’m proud of the tremendous amount of work that the transgender community has put into this project and all we’ve accomplished during this campaign.”

Tip of the hat to Cecilia Watkins. 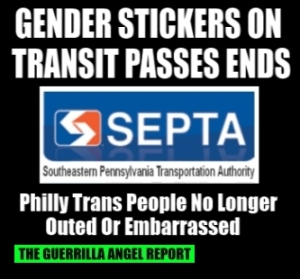