THE GUERRILLA ANGEL REPORT — While Lloydminster city officials aren’t sure if there actually are transgender citizens in this Canadian town straddling the border of Alberta and Saskatchewan, Mayor Jeff Mulligan, without precedence and with approval from most of the city councilors, proclaimed March 25 to 31 as Transgender Awareness Week and March 31st as Transgender Day of Visibility.

It was trans woman  Mikayla Schultz, founder of Trans Sask Support Services, who approached the mayor with the idea. Schultz founded the organization after finding a lack of support for transgender people in Saskatchewan. As part of an awareness campaign, Schultz has contacted all 15 cities in Saskatchewan and nine cities have issued proclamations.

From the Lloydminster Source newspaper: “Schultz expressed to the mayor that the awareness week would create a greater understanding of transgendered people and broaden the minds of people in the community, creating acceptance.”

Mulligan: “I think anything that creates awareness, inclusion, (gives) you a better understanding of society is a good thing to think about and a good thing to proclaim.” 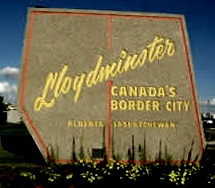