THE GUERRILLA ANGEL REPORT  — [UPDATE-2 – Obama calls student. See below.] We’ve come to expect trash from Rush — usually aimed at public figures — all for the purpose of lining his pocketbook with more money. This time however, Limbaugh unloaded on a Georgetown University law student, Sandra Fluke, who spoke in favor of birth control at a Democratic hearing on Obama’s contraception policy.

I don’t know about you, but calling a kid in college a “slut” on the air to enable one to rake in even more dough than they would otherwise earn makes one a TRUE slut.

Congrats, Rush, on a new low. Enjoy the new boat you’re gonna buy with the money you earned calling a college kid a slut.

“He wanted to offer his support to her,” Carney said, adding that Obama considers Limbaugh’s comments “reprehensible.” The president thanked Fluke for speaking out and expressed his disappointment that she was personally attacked, he said. 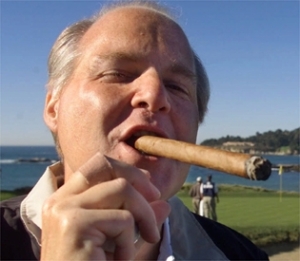