THE GUERRILLA ANGEL REPORT — Breaking news: we’ve approval from Rick Santorum for women to fly small airplanes! . . . Seriously Mr. Santorum, do you really have such a low opinion of women and their intelligence that you can easily utter such nonsense as if you’re doing women a huge favor?

Yes, I know, taking on Santorum is like shooting fish in a barrel but I’m going to give him history lesson anyway.

In 1984, Captain Beverly Burns becomes the first woman to captain a Boeing 747 jumbo jet. Meanwhile, Santorum was attending law school and upon graduation, his biggest accomplishment as a lawyer was the successful lobbying to permit the use of steroids in the World Wrestling Federation!

In 1995, Colonel Eileen Collins becomes the first female pilot of NASA’s Space Shuttle and in 1999, the first female commander. Meanwhile, Santorum was on his way to juxtaposing same-sex marriage with the notion of marriage based on pedophilia or bestiality. This of course, caused an national outrage and the cause for his google connection to “frothy”!

That concludes today’s lesson. There will be a quiz on this next week. 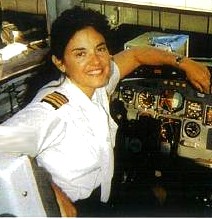 Like Loading...
‹ Trans? Boys? Girls? Andrej Pejic is not telling. Good for Andrej I say!
One photo is worth a thousand words — Outcome of the Idaho legislature “add the words” bill ›