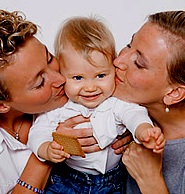 LEXIE CANNES STATE OF TRANS — (Updated with newer study — see below.) Results from a long-term study has given anti-GLBT marriage organizations a double whammy. Researchers found ZERO physical or sexual abuse in lesbians households in 24 years of monitoring. In addition, only 2.8% of the kids in these households eventually identified themselves as gay or lesbian.

This contrasts with American children in all households overall, 26% reporting physical abuse and 8% reporting sexual abuse. On this observation, one could argue children are safer in lesbian households than most common types of households (non-GLBT married couples, single parents).

Any claim that lesbian households produce a higher rate of gay children is pretty much debunked in the study as well.

While anti-LGBT marriage organizations are not going to pack up their tents and go away, some of the wind has been taken out of their rhetoric.

The researchers stated in The Huffington Post: “the absence of child abuse in lesbian mother families is particularly noteworthy, because victimization of children is pervasive and its consequences can be devastating. To the extent that our findings are replicated by other researchers, these reports from adolescents with lesbian mothers have implications for healthcare professionals, policymakers, social service agencies, and child protection experts who seek family models in which violence does not occur.”

Read more about this in The Huffington Post:  Child Abuse Rate At Zero Percent In Lesbian Households, New Report Finds.

“Despite what the haters may say, science has shown once again that gay and lesbian parents are just as good at raising happy, healthy children as straight parents.

Children’s behavioral issues are not impacted by the sexual orientation of their parents, but rather by parenting stress and other child adjustment issues, according to findings from a longitudinal study published in Developmental Psychology this month.”

The study was done by University of Kentucky assistant professor and psychologist Rachel H. Farr.

Like Loading...
‹ Rick Santorum: a man without a brain – researchers baffled.
Transgender woman to run for county commissioner in Florida ›