Home › Everything else › Former Iraq diplomat Tariq Aziz to be executed 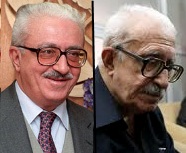 Iraq foriegn minister Tariq Aziz before the Iraq war and the other from a year ago (Photo credits: TelegraphUK & CNN)

THE GUERRILLA ANGEL REPORT — I’m a bit surprised at this development. He is already serving time for misdeeds while he was Saddam Hussein’s top diplomat, however, I was under the impression that unlike most of Saddam’s inner circle, Aziz wasn’t cruel or brutal, but rather, just carrying out his orders from Saddam. At times he appeared to be the only rational thinking human within the Iraq leadership. He was in American custody only until recently. But, we’re out of there now, and his fate lies in the hands of the Iraqi people. I do wonder if the timing of this is to simply distract people from the other troubles within the country as the last American troops pull out or some other reason not actually having to do with justice.  He is appealing the decision, so it is going to be interesting how this plays out.